This was an interesting class. There were some continuing students from the year before, the inevitable drop-outs, and then some new recruits who had heard about the course and wanted to participate. The ones who were continuing were given slightly more challenging work and the ones who were new had more of less the same curriculum as the year before. However, because it was a mixed class I wanted to shake it up a bit and had worked out a whole plan of how I would teach both levels at the same time – as I was only afforded one class a week at the prison and not two.

So I thought about it deeply, drew my pictures, plotted and planned …

Now there are two differing opinions about how to start writing. Some people start with structure, others with an interesting character that they build everything else around. Previously we had started with structure only, then later moved onto character development. Now we would start the other way around. It would keep all the material new and interesting for both groups.

Now in 2014 the prison had been closed for about 3 months when no-one was allowed in or out of it. The reason being that there had been some gang-related warfare, and they could not take the risk of people coming in especially if they may be attacked. I was grateful for the intervention but from a teaching perspective it was death to me.

So I formed a way of working that included the new comers, but worked on modules of 6 months. Because in reality, working inside the prison might seem like a quiet place, but honestly it’s an extremely noisy environment. People are always coming and going from classes, they have to visit their Case Management officers, their doctors, dentists, lawyers, psychologists, go to the loo! Classes are very disturbed. The corridors echo and there is an incessant buzz of things happening outside one’s classroom.

In my time working there I reasoned that in reality it takes about two years to get through material that on the outside would probably take about one year. Although on the outside one definitely has distractions, inside they seem so much more disruptive and heavy. It is a deep, chaotic, painful environment to operate inside.

So instead of starting with the structure and I had done for the previous class, I started with character development so that everybody could get something new.

And the leaders in the group were not happy about this. At all. They didn’t want to share a classroom with the ‘first years’ because they felt more advanced from them. In my need to be a good teacher, and be on top of my work and prepared, I had failed to take care of a basic human need. They needed kudo’s for the previous work that they had done. They didn’t want to feel as though they were ‘repeating’ first year. Little did they know that in this creative art-form it was all growth anyway. 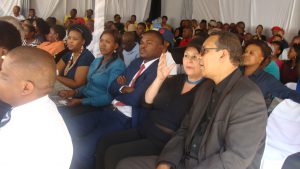 They still had a long way to go to become skilled craftsmen in the task of writing a script in a globally accepted language and art-form.

The one’s that stayed with the group were thrilled because they got almost private attention. There were fourteen of them. And it worked for me because I could develop my system quietly without pressure.

The stories turned out great! They had definitely improved from the previous year. The ‘elders’ of the group helped the newcomers and I got some magnificent stories that came out of that year. Some extremely talented writers too and the first group had improved so dramatically people whom I never thought would become writers surprised me. I think they even surprised themselves too.

The class became a very loved place to be for the participants. They called it ‘the coca-cola room’ because it was so sweet. And from my perspective as a teacher, it felt very safe. I watched people learn to become more vocal about character analysis, society, speak out changes or choices that people can make in their lives. It became the ‘safe-space’. Whereas outside of this room no-one really knew who their friends were, my students admitted that if they see people from the Screenwriting coca-cola room, they knew they had a friend outside, that they were ‘safe’. This was big. I loved teaching this class. We had a good year. 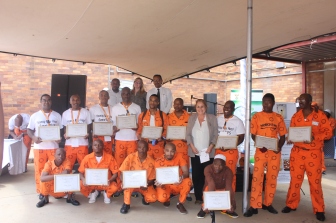 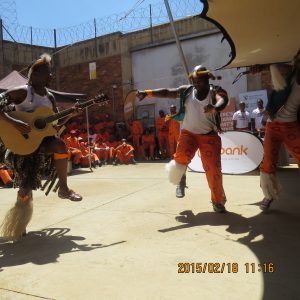 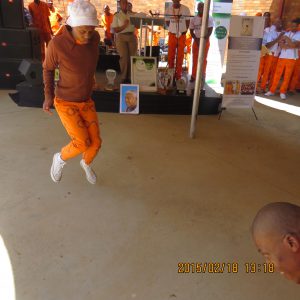 There are celebrations at these activities with offenders singing and dancing!

2014 was a big year for Greenlight District Project. It was the Pilot year for this innovative and extraordinarily inspirational project. At the Certificate bearing ceremony the were festivities, prison bands, singing, and general festivities. The offenders did all the decor themselves, organized the whole thing, even frames for the certificates themselves.

It had taken me about a year to negotiate with the powers that be within the Department of Correctional Services to persuade them that this project was a good idea. Not only would it be knowledge and give offenders a skill and possibly income-bearing possibilities in the future, but when creating characters in film, one is required to look at all possible sides of the equation. The good the bad, the inbetween and the extreme (the negation of the negation for those who are familiar with the film writing guru’s). Film can assist with developing critical thinking, emotional maturity, analysis, self-esteem, dignity, and who knows we can watch a whole nation of storytellers emerge.

The dream was that the offenders who choose to study (and some are allowed televisions and computers in their cells – not all of them have it – but there is a system) would be able to keep their minds sharp and alive instead of rotting in a cell somewhere. Wouldn’t that be nice instead of watching a nation deplete into the depths of beyond into depravity, crime, xenophobia, corruption and nepotism?

I was Quality Assured by the Board and I was on target! The program started. There were challenges but by the end of the year the offenders themselves gave me a certificate … it was such an honor it felt like winning an Oscar.

Of course the students are completely unaware of the challenges I faced as a screenwriting lecturer and mentor. Everyone was looking to me for guidance and I had no idea what kind of stumbling blocks would manifest.

The biggest issue for me as a lecturer of Film is that because the offenders do not have the stimulation of seeing the world from the outside, there are two areas that have needed my attention:

Think about it – I teach maximum offenders which means that they are convicted for 10 years or more – if someone has been inside for 10 years or more and if they came into the system when they are quite young, then how on earth was I going to resolve the problem of how to access those memories that have not matured with age at a normal pace as their other friends would have done?

I especially feel for the younger ones in their twenties – when their friends are out and about sharing drinks with their choomies in a pub somewhere, having girlfriends, studying at Universities and Colleges, they have no consciousness of what those conversations or stimuli might be.

I set to work … I am pleased to say that I have developed a system of techniques whereby I get them to close their eyes and imagine being in certain places. I create a scenario for them of being in the bush, in the Kruger National Park, or we ‘go to the beach’, or visit a spa, or go to a hardware shop! Whatever it is that we are doing I try to incorporate as much of this work as I can. I need to develop the techniques even more. But it is the only way I can think of to get them to travel without physically being able to do so.

I also believe that if I show them enough films set in various locations, in other countries too that although they are not traveling physically, I’d like to believe that I am giving them a little input somewhere that is significant.

As I started working with these men, I watched their consciousness change, their faces even changed! They became more alert, and started developing a sense of the power of words. To some it even started dawning on them that they could have a voice even while incarcerated. The program was working!

So even when the prison was closed down for three months because of some bad blood inside there (not my guys but other people) – there was no turning back.

Registration finally came through about mid-February 2015. And my first class of 2014 emerged victorious. I had some degreed people, a couple of Honours Students and a pilot!

Because of the trouble through the year, though, we had been shut down for too long to complete the curriculum for that year, so I had decided that they would have to finish in June 2015. As a result I devised a series of Modules every six months. So all going to plan, they can gain a first year equivalent when they have completed Module 1 & 2. Second Year will be 3 & 4. And third Year will be 5 & 6.

So this year – for this class of 2014! It was a big deal. It was a symbol. An icon of success. A reminder of achievement that regardless of adversity these souls are on a self actualization journey – they are weighing in and being tested by the course of time. They have achieved and they have become successful.

Kudo’s to these men who have chosen to be something else even though society has rejected them. The project continues from strength to strength. And next year (2016) it has been approved to take on the women.